Swasth Bharat Yatra, a Pan India Cycle rally, is inspired by Mahatma Gandhi’s Dandi March and ‘Salt Satyagraha’ of 1930. Through his tireless yatras, Mahatma Gandhi led the nation towards freedom from Colonial Rule. 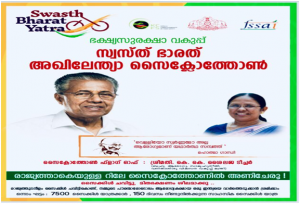 The Eat Right Day was organised on 16th October 2018 to mark the official inauguration of the “Eat Right India Movement” in the state.
Safe Food Initiative was conducted at Christ Nagar School, Thiruvananthapuram in association with the Indian Medical Association. CDs on safe food were distributed to the students in the school.
Flash Mobs by college students were conducted at KSRTC Bus Station, Thampanoor and Kanakakunnu Place Grounds carrying messages of “Eat Right India”. 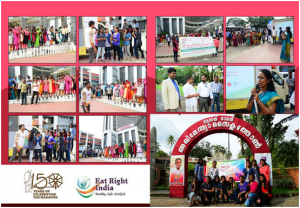 The prime focus was to garner public attention and spread messages on safe and healthy food.

Subsequent to the flash mobs, videos and short films on food safety awareness were played for the general public. General public and volunteers were made aware of Swasth Bharath Yatra and the messages of “ Eat safe”, “Eat healthy”, “Eat fortified”, Use less oil, less sugar and less salt were delivered and well received by the masses.
There was enthusiastic participation from the public and the message was conveyed to about 3000 people who were present at the activation points. Pamphlets on Swasth Bharath Yatra and the Cyclathon event were distributed to the public.

A formal inauguration of the movement in the state was carried out by the Honourable Minister for Health and Family Welfare, Women and Child Development and Social Justice, Smt.K.K.Shyalaja Teacher in the evening. The Event saw active participation of NCC Cadets, School and College Students, Police Officers, Officers from the Army and CRPF, Enforcement and Laboratory Officials, Media Personnel and the general public.

The Honourable Minister spoke on the importance of Safe and Healthy food and eating habits.

A screening of quick tests to detect common adulterants in food was carried out during the event. A panel of Doctors spoke on lifestyle diseases linked to food consumption patterns and ways and methods to eat safe, healthy and nutritious food.

All dignitaries and senior officials present offered flowers to the statue of Gandhiji which was followed by playing of “Vaishnava Jan To”, prior to the start of the event. 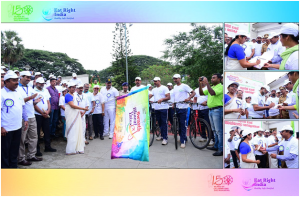 The Baton for Track 3 from Thiruvananthapuram to New Delhi was handed over by the Honourable Minister to the Additional Chief Secretary.

A total of 103 cyclists from various institutions such as NCC, Kerala State Sports Council, State Police, Fire and Rescue and CRPF participated in the cyclathon. All cyclists were provided with T-shirts and caps by the Department of Food Safety. The enourage was accompanied by the state police escort vehicle and two trucks provided by the Army and the CRPF accompanied the cyclists during the entire leg from Thiruvananthapuram to Kaliyikkavila.

Necessary traffic regulations were made along the entire track to ensure smooth movement of the cycle rally. A mobile Ambulance was provided by the Health Department that accompanied the entourage to address medical emergencies. 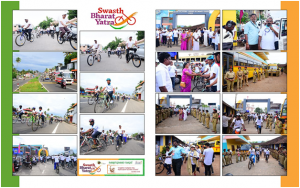 Activations were conducted at each stopover venue. The entourage was given a grand welcome at all the activation points that witnessed huge public gatherings.

The Mobile Food Testing Laboratory of the department accompanied the cycle rally from Thiruvananthapuram to Kaliyikkavila. The Lab was stationed at each stopover location to provide awareness to the general public.

Members from Local Self Government Bodies and Kudumbasree units ensured the provision of necessary amenities to the entourage at stopover locations. The Baker’sAssociation of Kerala (BAKE) actively associated with the Department and provided food and refreshment to all the cyclists during the entire day.

The cyclists were given a warm welcome at the final stopover destination – Grace Teacher’s Training College at Kaliyikkavila, by the Department of Food Safety, Tamilnadu.

The participants shared their experience of the yatra and all members including the public took the “Food Safety Pledge” to incorporate Safe and Healthy eating in their daily lives.

The first leg of the Cycle Yatra concluded on 17th October 2018 and the cyclists were transported back to their destination.